Skip to content
Home › About Us › Teachers › Lissy Craft 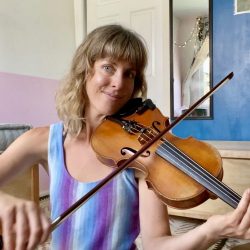 Lissy Craft’s life-long love of music-making began in Sacramento, CA, where she had the violin on her mind from the age of three. She grew up in the classical music tradition. In her late teens, seeking new ways of playing, she discovered traditional fiddling styles, including jazz, old-time, bluegrass, Cajun, and Balkan. Lissy moved to Boston with her fox-dog where she earned her Bachelor’s of Music at Berklee College of Music, studying jazz violin, as well as composition, arranging, and production. She spent some years delving into composition and worked for several film composers in the Los Angeles area. However, she always found herself (and her fiddle) on the other side of the microphone, recording demos and cues for her film scoring mentors. Lissy made the move back to her home state of California, where she loves living in a mini apartment, on a tiny street in a little neighborhood, in a BIG town. She performs with Los Angeles-based bands for private and public events as a violinist. In addition to her performance life, Lissy specializes in early childhood and elementary music education. She is trained in the Orff-Schulwerk method and worked for several years with her mentor/teacher, Lynn Kleiner, an internationally recognized leader in early childhood music education. Lissy is grateful for the musical life she has lived so far and is excited for what is to come! In her free time, she most certainly is drinking tea, learning new fiddle skills, practicing yoga, propagating succulents, or picking flowers while hiking with her dogs.