Skip to content
Home › About Us › Teachers › Heidi Goldstein 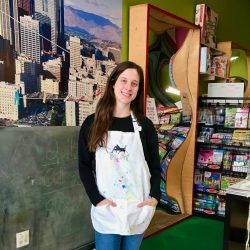 Heidi Goldstein grew up splitting her time between Miami and Washington D.C., two cities that nurtured a lifelong appreciation for culture and diversity. She began pursuing her interest in film and photography at NYU’s Tisch School of the Arts where she received her BFA in Film and Television production. She went on to work in documentary and commercial production for several years, traveling throughout Asia, Africa, and Europe. In 2013, she received a grant from The Cisneros Fontanals Art Foundation to shoot a portrait on their founder and one of the world’s leading art collectors, Ella Fontanals-Cisneros, and her work with emerging and established Cuban artists. Upon returning to Los Angeles, Heidi found her passion in a new kind of art scene: teaching sensory and visual arts to infants and toddlers. During her time abroad, she had served as a visiting teacher at a children’s art studio in Madrid, so when she found a similar opportunity in Los Angeles she jumped at the chance. These days Heidi has finally unpacked her suitcases and lives with her boyfriend and their beloved dog, Buddy. She continues her photography with her work appearing in Vogue Latinoamerica, Cultured Magazine, El Pais, ArtNet, and Cuban Art News, and she is grateful to share her love and knowledge of art with a new generation.