Skip to content
Home › About Us › Teachers › Angie Engelbart 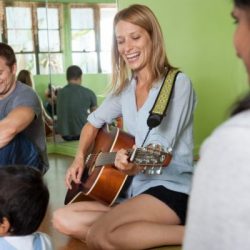 Angie Engelbart is a transplant to southern California from the midwest and has been teaching at PLAY since March of 2009. A native of Iowa farm country, she previously lived in Kansas City, where she was the soprano apprentice with the Kansas City Lyric Opera. She appeared as Papagena in that company’s production of Die Zauberflöte in the spring of 2008 and has a broad resume of opera and musical theater roles to her credit, including recent stints at the Hawaii Performing Arts Festival. Besides stagework, Angie has several years of experience teaching private voice and piano lessons, and maintained a studio of undergraduate voice students at the University of Kansas. She also particularly enjoys working with young children and has worked (and played!) extensively with them at music schools in the Kansas City area. Angie received her B.A. in music from the College of St. Benedict in St. Joseph, MN, and her masters of music from the University of Missouri-Kansas City. When she’s not tackling musical endeavors, Angie can be found hiking, cooking, or flying home to Minneapolis to nurse her inner farmgirl and play in the snow with her family.

Angie left us in summer 2016 when she moved back to the midwest with her husband, Matt, and their son, Isaiah. She will always be a part of our PLAY family. Fortunately–even if you never took her class at PLAY–you can’t miss her on our CDs and Vimeo channel.